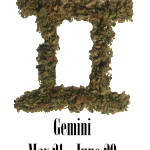 Alright stoner Gemini, the three horsemen of negativity have road on to influence other stoner star signs this month.  How did you do combating the waves of negative cosmic influence in January? Great, now forget about it! Battling stress and anxiety can be a mighty challenge.  Coming out the other side, there will be a tendency to relax, and fall into a spell of lethargy. But the February period is a time of great opportunity. Instead of battling cosmic demons, now your effort can be placed toward progress with cosmic support.

Get up and get moving stoner Gemini!  Allow yourself time early in the month to sink deep into a medicated meditative smoke session with the sacred herb.  Use this meditation as a cleansing of the battles waged in January. Perhaps even burn some sage during this medicated exercise to cleanse your physical space as well.  But once the deep thought and recognition of the January struggles has been completed, it is time to move into the new phase February represents.

February is marked by opportunity, positivity, and creativity.  Keep your stash jar loaded with your favorite Sativa strain. Use the sacred herb as a catalyst to get up and get moving.  Universal support will favor action and creativity. Avoid couchlock and sedation as much as possible this month. If there are moments of malaise or flat spots of creative thinking, take your favorite bowl and hunt down a new smoke spot out in nature.  Bring a canna-buddy along for the quest. Surely this mission will inspire action and loosen the gears of creativity.

An important note about your canna-crew:  Your cannabis companions and smoke circle acquaintances will have their own unique cosmic influence.  Your newfound go-go mentality may leave them puzzled. There is no time to slow down for explanations stoner Gemini.  True canna-fam won’t hold you back, but instead will light one up to support you on your terrestrial adventure.